There’s a fascinating bit of traffic arbitrage going on right now by whomever it is that owns Yahoo! search nowadays.

UPDATE: turns out this is part of a larger digital display strategy, which has been covered here

I first noticed it when I was served a Facebook ad for what seemed like an oddly specific low-funnel search term . The ad had custom creative for that specific term and clicked through to the usual SERP (search engine results page) for that term on Yahoo search. 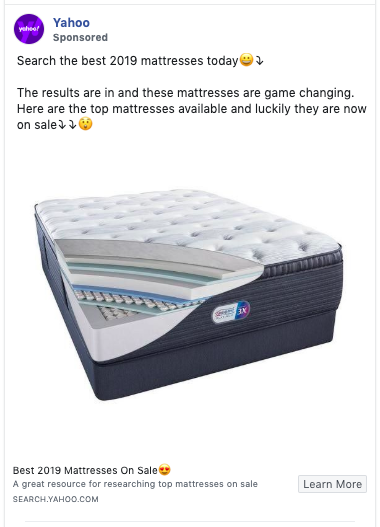 At first I thought that some random advertiser was pulling a creative workaround to get their Yahoo search CTR up, but then I realized two weird things:

What’s going on? A quick peek at Facebook’s Ad Library shows that Yahoo is running ad campaigns on Facebook for high-profit search terms, with some terms like COPD having hundreds of ad creative variations.

Here’s how I think it works:

This isn’t the only time you see one platform advertising on another. Part of TikTok’s enormous growth has been driven by making ads from the best content they have on their platform. However, it’s the first time I’ve seen a search engine drive traffic to their own SERP, and then modify that SERP to drive more revenue.

It raises a bunch of questions that I’d be curious to know the answer to: